In general, oil impregnated paper and pressboard are used in the transformer production for insulation purposes. Furthermore, insulating oil is used for cooling. During the operation the ageing condition of the paper/oil dielectric must be registered in a fast and secure way. The status assessment of the insulating oil can be realised by oil sampling at the equipment and by a follow up test in the laboratory rapidly and without any problems. In addition, from the Dissolved Gas Analysis “DGA” the thermal and electric status of the transformer can be concluded.

The status assessment of the solid insulation is much more complicated. For a paper sampling and ageing examination the transformer has to be shut down and the active part must be withdrawn. If cellulose is thermally decomposed, a stable degradation product furfural (2-FAL), is produced, which is soluble in insulation oil and can analytically easily and definitively be determined. From its determination the ageing status of the solid dielectric (paper/ pressboard) can be concluded.

The insulating paper used in the transformer production consists of cellulose of 90 %, of lignin (wood material) of 3 % to 7 % and of pentosanes (polyaldopentoses). Cellulose itself is a poly- condensation product of glucose units linked with each other in a chain. The average value of glucose units per cellulose molecule is defined by the average degree of polymerization “DP”. New insulating paper has got a DP of 1300 to 1100 which can decrease to 950 after drying processes [1]. During the operation the DP decreases more and more due to a sequence break and finally reaches a value of 200 where the mechanical endurance is not measurable any longer. In the DP range of 900 to 500 the mechanical endurance indicates high and relatively constant values, in the DP range of 500 to 200 there is a linear connection between DP and the mechanical strength [1]. The mechanism of the cellulose decomposition mainly depends on the external conditions. So, in general, three degradation mechanisms can be distinguished: thermal decomposition, oxidation and hydrolytic decomposition. Most of the time they are executed simultaneously in the transformer. Depending on the operation conditions one way or another is preferred. They are presented as follows:

The thermal cellulose decomposition up to temperatures of 200°C is similar to the decomposition due to normal operational ageing. When humidity, oxygen or other oxidants are absent, glycosidic bonds are splitted. Glucose units are resulting, as well as carbon oxides and water [1,2]. Below 200°C other reactions may occur too which cannot be explained here in detail.

The presence of oxygen leads to an oxidation of the glucose units. Depending on the oxidising agent and the pH value (acid, alkali) different decomposition products are formed. Generally hydroxyl groups are oxidised to carbonyl (aldehydes) and carboxyl (acids) groups. This weakens the glucosic compound in cellulose, and thus can lead to a chain scission provoking a decrease of DP. Simultaneously, water is formed [1,2].

Water and acid cause a scission of glucosidic bonds and lead to a release of glucose molecules. Although in the transformer production (conditioning) a very good drying of the solid insulation is achieved, always a certain rest humidity in paper/ pressboard remains. If during the normal operation oxidative decomposition occurs, with the appropriate temperature conditions can be produced which will promote hydrolytic decomposition. Glucose molecules are decomposed to furfural (2-FAL) among others. With temperatures of 100 to 140 °C first a glucose molecule is released from the cellulose chain while consuming a water molecule. This process as well as the further glucose decomposition to furfural are acid catalysed [3]. The allocation of furfural between the solid and the liquid insulation is strongly out of phase in favour of the solid insulation due to its polar characteristics similar to water. Furfural is a comparatively stable compound under normal transformer operation conditions [2]. It is submitted to a comparatively slow decomposition to carbon acids [3].

These reactions show that three water molecules are formed along with the formation of one molecule of furfural (2-FAL). These can then be used for the
first step of the degradation process (auto catalyse) and so they accelerate the ageing of the solid dielectric.

Correlation between 2-FAL and DP

The determination of furfural (2-FAL) and four other related compounds is realised by means of a High-Pressure Liquid Chromatograph “HPLC” after a solid-liquid separation from oil [4]. An interpretation of the measured 2-FAL content in regard of the condition of the solid insulation (paper and pressboard) can only be realised seriously under certain circumstances. The transformer’s history (oil conditioning, oil change) and the moment of the oil sampling are of great importance. So, the furfural content in oil significantly decreases after an oil change or an oil conditioning and then increases again until the equilibrium is reached [5]. Literature shows a description of the correlation between furfural content and average degree of polymerization on the basis of measurements at real systems [1,6]. 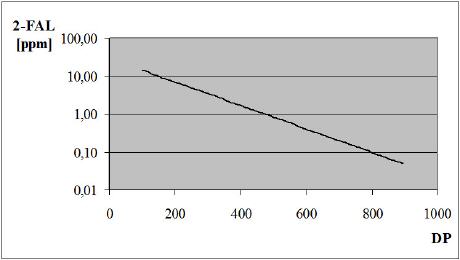 Figure 2. Correlation between 2-FAL and DP

Furthermore, there are graphics on the basis of ageing of insulating paper in a laboratory experiment and in typical conditions for transformers [1,7]. Despite of few differences these graphics present a possible sound interpretation of the furfural content in insulating oil. Actually, the statistic uncertainty of the mean straight line and the different temperature distribution do not permit any clear identification of the average polymerization degree with a measured furfural content. Nevertheless the determination of the furfural content [4] and the average polymerisation degree [8] with real systems by PCL show a good conformance.